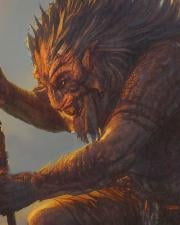 Bugbears are terrifying humanoid creatures that originate in the Dungeons & Dragons universe. Bugbears are brutal and primitive; they love to sleep and eat and attack other creatures without any warning. They are also very manipulative, as they force weaker beings into being their slaves.

But bugbears are not a common sight; because of their rarity, they are often seen as nothing but legends and myths. But everybody who has ever faced a bugbear will tell you something different, assuming they survived.

So, if you’re creating your very own bugbear character for DnD 5e, you’re in luck as this bugbear name generator will generate amazing sounding bugbear names!

To start, simply hit generate or enter your name to get your personal bugbear name!

Naming bugbears can be quite difficult since there aren’t many official names known. But all in all, they are quite guttural and often resemble goblin names a lot. Because of that, if you’re not fully satisfied with your here generated bugbear name, you should definitely check out our Goblin name generator.

Another tricky part of creating bugbear names is that there are no known female bugbears around. Because of that, our female bugbear names follow general female naming rules: they seem a little bit softer than male names and end more often with a vowel.

Here is a handful of our most popular DnD name generators: